The Boy & His Puppy!

This week we have a group of kids from Millbrook, near Truro in Nova Scotia. There are also a couple of girls from St. Mary's this week as well.

Last night was the first Chapel Gathering for the week. Our guest speaker this week is Micah Hiltz, a youth pastor from Fredericton. He had a wonderful introduction to the week and set a foundation for the scripture as the wholly inspired Word of God. As an illustration of this point Micah asked three staff members to write portions of a short story. Each was to write about a boy and his dog, name them and complete a portion of the story. Anna was asked to write the introduction, Abby the big twist and Trevor was to conclude the story. The only catch was none of them could know what the other was writing. As you can imagine the story didn't fit together very well. Micah explained that no one but God could be the author of the Bible, that all of the books, although written over a period of over 1500 years by the hand of 40 different men, God inspired the whole Bible, keeping it 100% accurate and with no mistakes! I thought it was a good illustration, so I've posted the story written by our three staff members below for you to read.

Once upon a time, there was a boy & his new puppy ...
(Anna Northrup) "The boy's name was Bobby, the puppy, who had come with it's name, was called Rufus. Bobby was the only boy in his grade who still had not grown a moustache, he wore hand-me down clothes, had to walk to school because he'd outgrown his bike, and was often held back after class, not because he was disruptive, but because he could never pay attention in his class, and this upset his teacher.
Bobby never seemed to have what he wanted, and things never turned out the way he hoped - until the birthday that his parents gave him a new puppy for his gift, and he became the happiest boy in the world."

... but suddenly one day, the puppy was gone ... (Abby Nash) "His bark wasn't seeming to work ... the owner was paniced that she couldn't find her dear ol' doggie Bessy. Andrew was beginning to worry and he was still out walking in the deep dark forest with the moon shining and UFO's flying by at 1,000mph ... then Andrew suddenly heard a strange noise and somehow a 50x larger Preying Mantice comes out of the wood and starts chasing Andrew ... exasperated, Andrew finally found a little hole in the ground and crawled in it ... the next morning he wakes up and gets a start on the crack of dawn and starts looking for his dear ol' bessy."

(Trevor Knightly) "It turned out that Bullzeye wasn't really lost but instead while coming home from Moncton the entire family got really tired. Mom was asleep in the front seat and Johnny was also. Even Dad almost went off the road. But when they all got home tired as ever, Johnny forgot Bullzeye was in the very back of the car. So when Johnny couldn't find Bullzeye, he was sleeping in the car. Fortunately Bullzeye started barking and Dad heard him from outside when he was watering the garden. dad let Bullzeye out and Johnny who had been searching for hours finally found Bullzeye."
... & the boy and his puppy lived happily ever after. THE END! 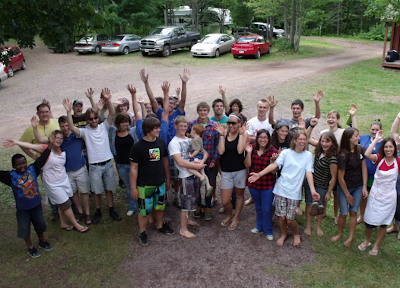 The staff, all ready for another week! 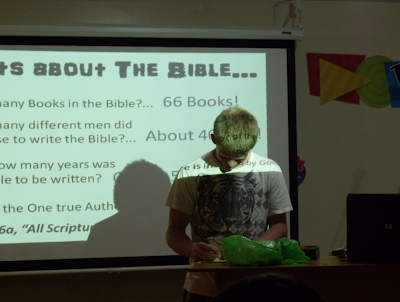 Trevor writing his piece of the story! 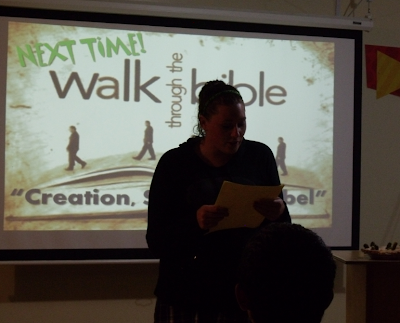 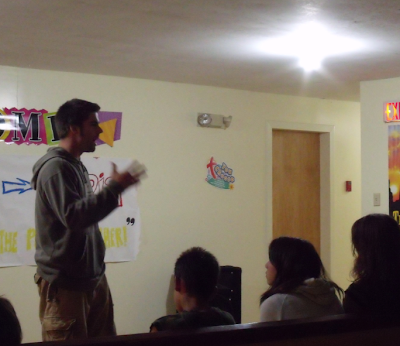 Micah bringing it all together!
Posted by The Fawcetts at 9:00 AM No comments:

On to week two!

It was a fabulous week at camp! With only 20 campers we had a smaller group than usual, but it provided the staff with some unique opportunities to minister to the campers one on one! We all took note of the overall atmosphere of the camp, it was positive and fun. The camp ran smoothly and we were blessed by each and every chapel time with Pastor Gary Countway. We saw two young fellows make professions of faith during the week and have been delighted to see a young girl come to the Lord as well. Her cabin leader is here for the weekend and received several phone calls from her after she returned home. She expressed deep interest in knowing the Lord and her cabin leader has been guiding her to passages of scripture to read on her own. Hopefully this will be a relationship that can continue as there is opportunity for discipleship.

We were also blessed this week by staff devotion times with Jamie Weber from Gorrie, Ontario. He challenged each one of us every morning and our times of prayer and Bible reading set a wonderful tone for the day.

We had a very rainy day on Thursday, but it didn't dampen spirits, the campers enjoyed the opportunity to play board games and spend time one on one with the staff! Please keep all of the kids in prayer as they return home, that the things they have seen and heard and learned might dramatically impact their lives!

We've had a nice restful Saturday and are looking forward to another great week. Some new staff have already begun to arrive, hopefully their enthusiasm will be contagious... 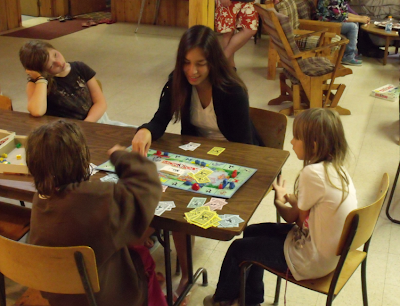 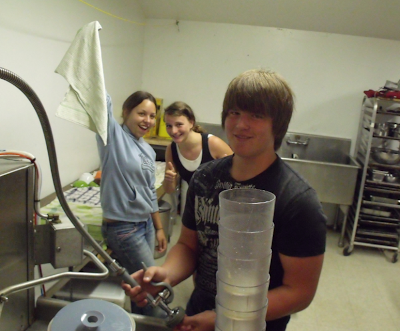 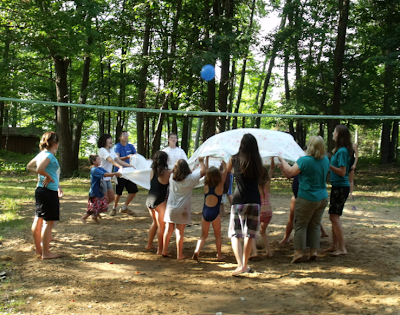 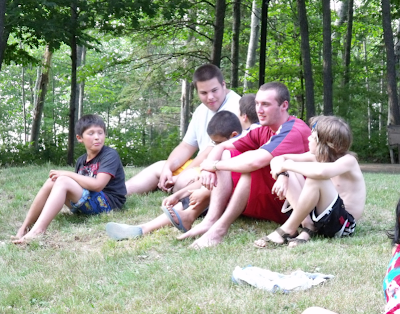 Hanging out with the guys!
Posted by The Fawcetts at 6:17 PM 1 comment:

A great start to Camp!

Hi all! It's about an hour until staff devotions, so I thought I'd take a minute or two for a quick update! We're in the midst of week one of Children's camp. This week we have kids here from Saint Mary's, a community near Fredericton. We had a wonderful staff training on Monday, Kevin gave an excellent challenge to the staff and we encouraged them about the importance of the work we are doing this week. The kids arrived shortly after lunch and the camp was once again full of the wonderful sound of kids!

There is so much to be thankful for to have this opportunity to serve the Lord, and these summer camps are always such a huge blessing to us. It is always impressed upon me just how richly the Lord can work through each and every staff member, not only in the lives of the campers, but in our own lives as well!

Keep us in prayer, campers, staff and missionaries! 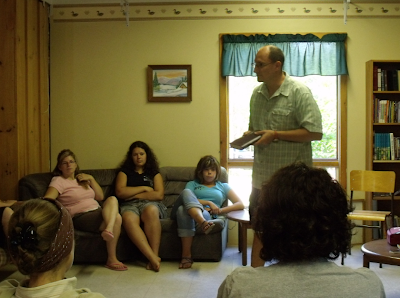 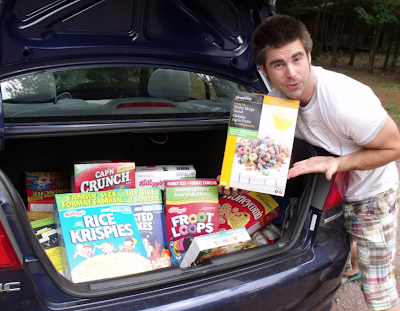 A huge thank you to Devon Park Baptist Church for their donation of cereal to camp, and thanks to Micah Hiltz for delivering it to us! 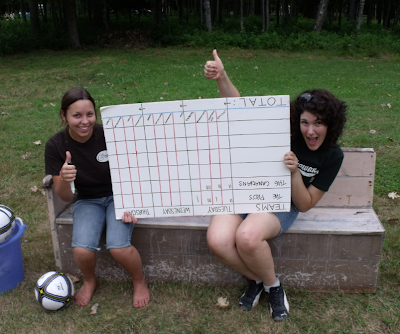 The girls, all ready for afternoon soccer! 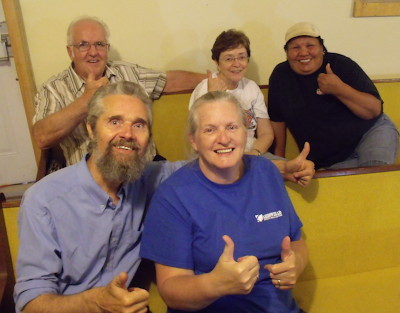 Some of the NCEM team!
Posted by The Fawcetts at 7:10 AM No comments:

We've been keeping at it! The grounds are starting to look ready for camp! We've been very thankful for help from the guys, and we've had some more helping hands arrive today. Ricky and Emily Mitton have come to help us with some of the last minute things. It's shaping up to be an awesome camp season! May the Lord be glorified in all that happens at Arrowhead this summer! 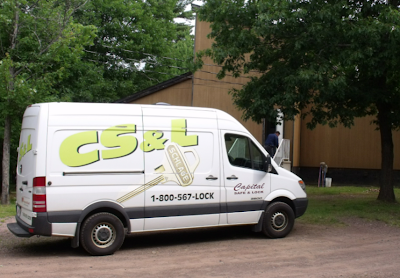 Capital Safe & Lock came to Arrowhead to get us all set up with a uniform lock system and new keys for the buildings! 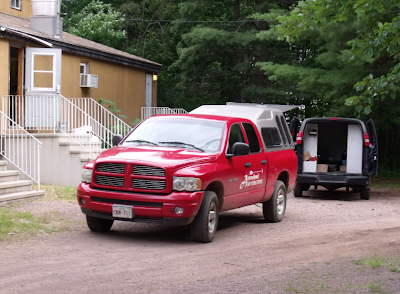 Fundy Gas was here to service the propane stoves in our kitchen! Venus should be happy with the well running ovens! 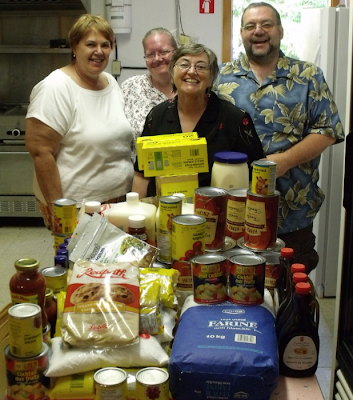 We have been overwhelmed by the enthusiasm and support that the good folks at Riverglade Baptist Church have shared with us! After their trip up to help us with our work day they returned home and busily collected a great big load of groceries for the summer camps! Thank you so much!

Posted by The Fawcetts at 9:51 PM No comments:

some fresh driveway on the driveway!

We've been busy this week with some of the many projects that we're trying to accomplish before the staff and campers arrive, just over a week from now! We've been having regular planning meetings with the Strouts and have been dividing up the work to be done!

Yesterday Kevin, Ben, James and I went to Fredericton to run camp errands and had a chance to stop in and visit some kids in Oromocto who are planning to come to camp this summer! Today Liz and Marcia went with the camp truck to buy the remaining groceries that we need for camp this year. They'll be home in a couple of hours and we'll unload the goods!

Today Mr. Fearn came and put some fresh driveway on the driveway ... it looks great! We had to widen the driveway to get the new office to it's new spot on the property, so now we have a nice wide entrance down as far as the office where the gates will be relocated. 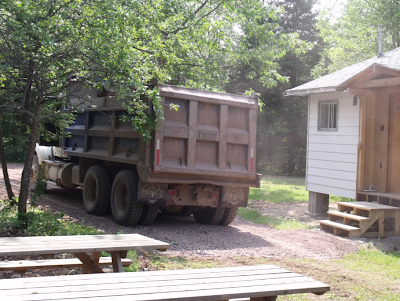 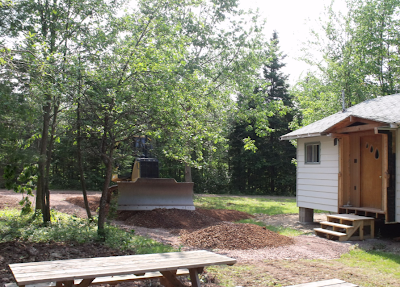 Late in the day as Ben and I were finishing cleaning up the picnic area and getting ready to head home, the Advanced Tech guys arrived to work on the fire alarm and internet access. They worked until about 10:30 and have just left. We now have internet access at the Center, which is a necessity for us to operate fully out of the new office. 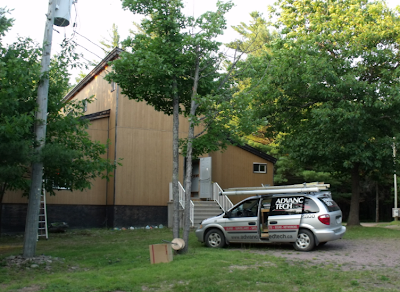 Tomorrow promises to be another full day with lots of exciting visitors. We should get lots accomplished!
Posted by The Fawcetts at 10:58 PM No comments: